THE BEGINNING
Founded in the fall of 2017, Cougar Strong Racing is the GreenpowerUSA F24 Racing Team at Long Cane Middle School in LaGrange, Georgia. During our first season we built our first Formula 24 race car and competed twice. At our first race, the Chambers County Grand Prix, we finished 2nd overall. Our second race was the season finale Grissom Grand Prix May 5, 2018. We finished 1st in the endurance race and 2nd overall out of 28 middle school teams. Although we only competed in 2 of 4 events for the 2017-2018 season we finished 8th nationally among middle schools. We were very proud of the results for our inaugural season and set very ambitious goals for year 2.
SEASON 2
For the 2018-2019 season we added a second team of students and a second Formula 24 race car, intent on making a run for the season points title! Our two teams competed in 7 races, and we also hosted the first-ever GreenpowerUSA race in the state of Georgia - the Diverse Power Grand Prix at LaGrange College on February 28, 2019. We won the top 2 spots at several races across the season, with our new #999 team winning the National Championship, and our #000 team winning 2nd in the nation among middle school teams.
SEASON 3
The 2019-2020 season was our 3rd and half of both teams were brand new. Our goals didn't change...we focused on continuous improvement and continuing our winning tradition. We started with a commitment to 9 races for the season - four of which would have been semi-local and five that would be held in Huntsville, AL. We got off to a strong start securing the top two spots among middle school teams and we held on to that lead through our last race of the season, which was the 2020 Diverse Power Grand Prix on Leap Day. One final race was held at Hazel Green HS in Hazel Green, AL but we weren't allowed to travel due to the COVID-19 pandemic. Even though we skipped the last race of the season we were still far ahead of all other teams. Our #999 team won their second consecutive National Championship and our #000 team again finished 2nd in the nation for the middle school division. We were so proud of our students! ​
SEASON 4
For the 2020-2021 season we had some big changes. Our teams moved to grade level specific teams - the #999 team became our 8th grade team and the #000 team became our 7th grade team. We also created a 3rd team that will be our 6th grade team so Cougar Strong Racing was 45 students strong. Additionally we created 2 new 9-week STEM classes to allow an additional 240 students a year to get an introductory experience to GreenpowerUSA.

During those 4 race events our teams accumulated an amazing amount of miles during race heats. Our 999 team had the most with a total of 273 miles. Our 000 team was right behind them with 264 miles, and our 555 team accumulated 227 miles during race heats. That made our program total 764 miles logged during race heats in just 4 events - more than any other program in the United States...wow! This was not an easy task and required a well tuned & maintained race car by our build teams & pit crews, and consistently good decisions by our drivers on the race track.

Officially GreenpowerUSA chose not to name a 2021 national champion due to the travel restrictions placed on some teams by their local boards of education. But our season performance was unmatched, so we are going to consider ourselves the unofficial national champions of both the intermediate modified division and the intermediate stock division. Congratulations to Cougar Strong Racing #999 & #000 - #1 & #2 in the Nation for the third consecutive year, and to #555 for taking the top spot in the stock division in their inaugural season!
SEASON 5
For our 5th season of GreenpowerUSA competition Cougar Strong Racing brought on lots of new team members. It was our first "full" season of races in 2 years and we were glad to be back at it. We traveled to 9 race events across the season with races in both Alabama & Georgia. Our Alabama races included events in Lafayette, Oxford, Decatur, Huntsville, & Lincoln. Our Georgia races included events in Columbus & LaGrange. In total we traveled 1,408 miles getting to and from our race events - quite the adventure for our middle school students!

Going into the national championship race our 3 teams led their divisions with the highest 3-race point totals of all teams in the nation. For the intermediate modified division our 999 team's 3-race point total was 298.335. Our 000 team was right behind them with 297.670, so just 0.665 points separated them (the next closest team had 270.816). In the intermediate stock division our sixth grade 555 team's 3-race point total was 291.833 (the next closest team was 288.077). But all 3 of our teams knew they had to have their best performance of the year in order to win the big one at Talladega & earn the title of national champion in their division. We couldn't be more pleased with the outcome at Talladega, finishing 1st, 2nd (modified), & 3rd (stock) overall.

The highlights from this season...The accomplishments listed above make this our very best season yet, and I am blown away at the commitment & dedication that it took to make it happen - both in the classroom with team presentations, and on the race track during the endurance races. Fifteen students on each team, working together, to accomplish something special. I could not be more proud. Thank you to the students who did the WORK, to the parents who supported our efforts from August to May, to our assistant coaches Chris Morris & Mr. McCalla, and to our team sponsors who made it all possible. GreenpowerUSA provides a special & meaningful experience for our students that has such a positive impact on their future, and we appreciate all that Drew Sparks & his team do to make it happen.

Congratulations to Cougar Strong Racing #000 & #999 - #1 & #2 in the Nation for the fourth consecutive year, and to #555 for taking the 3rd place spot in the stock division (They were just 4.624 points from winning the stock division national championship)! 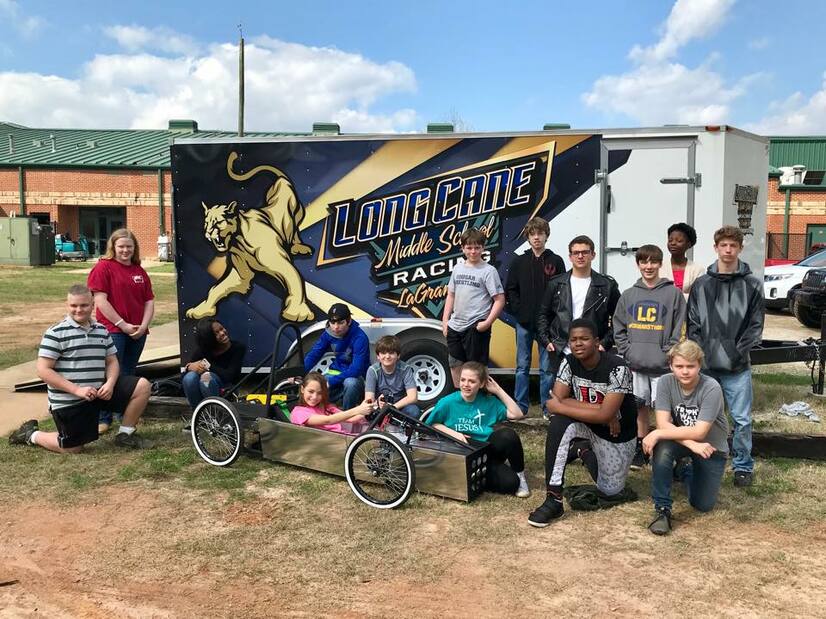 Pictured above is the original Cougar Strong Racing team started at the beginning of the 2017-2018 school year.
A tour of our racing lab early in our first season